Sachin Tendulkar told that – I have decided to retire from the one-day format of the game. I feel blessed to have fulfilled the dream of being part of a World Cup wining Indian team.

On the view of preparatory process to defend the World Cup in 2015 should begin early and in right earnest. I would like to wish the team all the very best for the future. 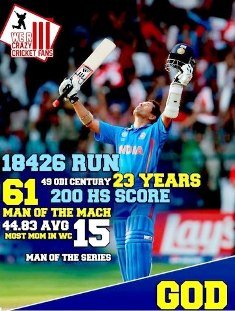 Tendulkar finished the old career with an amassing 18,426 runs in 463 one-dayers at an average of 44.83. This includes the record breaking astonishing 49 hundreds in the ODI format, including a first person to score a double hundred in this form of the game.

Sachin Tendulkar alone scored 11.27% of all the runs and 24.50% of all the hundreds scored by all Indian batsmen in ODIs!

Every body reaction of today morning was What!! sachin had retire ah!! Now one can believe on this. Truly Didnt Expect It Happen That Soon , Hard To Believe But Had To Accept The Fact .

One questions comes in my mind was that all these time, people were asking when is he retiring? Now when he has announced his retirement from ODIs, people are asking why has he retired!!

1 thought on “Every body reaction of Sachin Tendulkar retirement”

My sister geetha birthday was celebrated on 17th nov 2014 . We gave her a pleasant surprise with a photo cake of her. We had

The developers claim this will be the sixth largest terminal in the world when it opens. This terminal will be able to handle 27 million