On the eve of new year 2013,  I and my friends sathya, anantha and saravana went to ATP Chennai Open on the opening day dec 31. We spent a quite an enjoyable day. Saravana booked the ticket. We all went to 5.30 to the stadium. After some chat with all of my friends we went inside the stadium.

Initially we had a photo session with every place which looks better and got a new t-shirt of chennai open for free. After had a nice time we went to tennis court stadium to see the main match. We had seen singles and doubles match. Nice to see the tennis in the professional manner.

Looking for more matches to come.

Rahul Dravid is the best/great batsman ever in cricket. Like to see the wall sign off on winning note!!

Thanks Dravid for all the the good memories of Indian cricket. When an Indian batsmen, at one end getting out instead of getting run the wall stands tall not only blocking the wicket but scoring the runs in other end.

Rahul Dravid retirement is the good news for the bowlers because he gave bowlers a hard and long days in the field and some bowlers get frustrated in bowling to him. 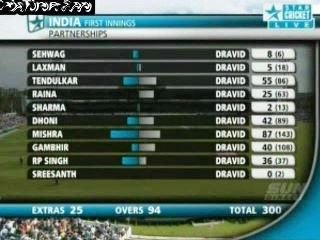 Rahul Dravid is a gentle man, who respect all at equal merits.

Where is the spirit of game?

Bell, after completing the third run off a shot by Eoin Morgan on the final ball before the tea break walked off the crease, assuming that the ball had crossed the boundary and  went to Tea where Tea had not been called.

But Praveen Kumar made a diving effort at boundary and threw the ball to Abhinav Mukund who clipped the bails at the striker’s end. Bell was well aware of his folly but pretended that he didn’t know what had happened. Bell was dozy and he knew it. He saw Praveen Kumar’s reaction on the boundary and thought it had gone for four. He even appeared to give the indication that it had gone for four to Eoin Morgan.

But crucially the umpire had said nothing. He did not call four and he did not call tea. When the bails were taken off and Bell turned round to see what was happening he knew he had made a mistake. It seems like actually played the situation very well. He knew he had messed up but outwardly gave a very cool impression of not really knowing what all the fuss was about. The England players telling him to come off the field quickly and he did his best to get back to the pavilion. When he was given out, Bell blaming everyone which led to the crowd’s booing had unnerved the Indian camp.

Bell not only cheated but also let down his country.

Story of cheating in cricket:

England in this case certainly not playing by rules or spirit of the game. I guess its only Indian played the game in the right spirits UNFORTUNALY cheated by england cricket team .

Wow I can’t believe this! Finally this day has come. Who ever thought this would happen today.

Sachin Tendulkar created history by slamming the first double hundred in a one day international against South Africa at the Captain Roop Singh Stadium in Gwalior today. The master at almost 37 age, who has been ruling the game of cricket for over two decades, has become the first batsman in the history of ODI cricket to hit a double hundred. Batting maestro Sachin Tendulkar added another feather to his cap. In this match against South Africa, Sachin has scored 200* (notout) there were 25 fours and 3 sixes. He made this run at a strike rate of 136.05. India scored 401/3.

It is so great to watch Sachin Tendulkar playing and shares the joy of watching an epical innings with millions of his fans all over India and the world.

It was my dream come true when sachin hits the double century, where i am seeing him in my own eyes. wow!! This was his 46st century… the record get higher and higher..

He is the true master…He got his 200 which is much better innings than any body else. Hard to describe this cricketing god.

Sachin has already scored 46 hundreds in ODI and 47 tons in test cricket.

Some of the cricketing greats speak about batting maestro Sachin Tendulkar:

Mathew Hayden: I have seen God, he bats at number 4 for India in test.

Hashim Amla, the South African batsma: Nothing bad can happen to us if we’re on a plane in India with Sachin Tendulkar on it.

Yaseer Hameed in pakistani newspaper: Sometimes you get so engrossed in watching batsmen like Rahul Dravid and Sachin Tendulkar that you lose focus on your job.

Andrew Symonds wrote on an aussie t-shirt he autographed specially for Sachin: To Sachin, the man we all want to be.

Mark Taylor, during the test match in Chennai (1997): We did not lose to a team called India…we lost to a man called Sachin.

M. L. Jaisimha: The more I see of him the more confused I’m getting to which is his best knock.

Glen McGrath: The joy he brings to the millions of his countrymen, the grace with which he handles all the adulation and the expectations and his innate humility – all make for a one-in-a-billion individual.

Waqar Younis: He can play that leg glance with a walking stick also.

Andy Flower: There are 2 kind of batsmen in the world. One Sachin Tendulkar. Two all the others.

A hoarding in England: Commit all your sins when Sachin is batting. They will go unnoticed coz even the GOD is watching.

A banner in Sharjah: I Will See God When I Die But Till Then I Will See Sachin.

Peter Rebouck – Aussie journalist: On a train from Shimla to Delhi, there was a halt in one of the stations. The train stopped by for few minutes as usual. Sachin was nearing century, batting on 98. The passengers, railway officials, everyone on the train waited for Sachin to complete the century. This Genius can stop time in India.

Fan of Sachin From Me (Rajesh): What to tell about sachin still?..When sachin hits century even India lose we celebrate. We never give up hopes on sachin. Sachin never gives hopes on cricket.

Yesterday I have witnessed one of the best knock of the sachin tendulkar who took the Indian innings single handedly and almost made India win the match. But at the end it was heart-breaking loss.

India came close but fell short by just three runs as they folded for 347 after Sachin Tendulkar’s sublime 175 off 141 balls. Meanwhile Sachin Tendulkar becomes the first international player to make 17,000 ODI runs during this match. What a match to see. Sachin Tendulkar always the best. He as played more than 430 ODIs, scored 45 hundreds, 91 fifties and picked 154 ODI wickets.

Sachin Tendulkar at post match ceremony told that passion to cricket and playing for India keeps me motivated. This word from the legends will motivate so many youngster who play cricket. This statement made by Sachin Tendulkar put me him in my heart forever.

One thing that I ask others is, never ask Sachin to retire from ODI cricket and never talk about sachin’s retirement. He is truly the best.

The awards were given away for performances between August 2008 and August 2009. The winners were selected by an elite panel that included Clive Lloyd, Anil Kumble, Mudassar Nazar, Stephen Fleming and Bob Taylor.

Pakistan’s Aleem Dar walked away with the Umpire of the Year prize. Ireland captain William Porterfield was named the ICC Associate Nations’ Cricketer of the Year.

The ICC Test team of the Year:

ODI team of the Year:

The ICC Champions Trophy opening match on Tuesday, where Sri Lanka beat South Africa by 55 runs which led India to become the number one ODI team.

As per the latest ranking, the current number one side the Proteas dropped to the third spot allowing India to take up number one place and Australia second position.

A few days back, Mahendra Singh Dhoni experienced one of the proudest moments of his two year reign as India’s one-day captain when a six-wicket win over New Zealand in the Compaq Cup took Men in Blue to the top of the one day rankings. But, the Men in Blue’s stay at the top lasted barely for 24 hours after they lost their match to sri lanka.

Now it is a right chance for the Men in Blue to capitalize and make it count to crowned the No:1 ODI Team status.

Dhoni’s team jumped ahead of Australia, who are third at 119 points, with 126 points to their kitty after the annual update ensured that the ODI table reflects recent form and older results discarded. India’s rise in this year’s update reflects its outstanding record during the past 12 months.

Once a year, the rankings change overnight without any new ODIs necessarily being played.

India is in a strong position to grab the top slot of ICC ODI ranking chart during the Sri Lanka tri-series next month as Mahendra Singh Dhoni’s side is now just one point behind South Africa at second place after the annual rankings update.

The chart now reflects all ODIs that took place since August 1 two years ago. All matches played until the start of next August will be added to this table, so by then the ratings will be based on three years of results.

Next August, the first year of results will be dropped and this pattern is repeated each August, with the oldest of the three years of results removed to be gradually replaced by results of matches played over the following 12 months

Meanwhile, the ICC ODI batting list is still headed by the Indian duo of Dhoni in first place and Yuvraj Singh in second position.

Virender Sehwag is out of the ICC World Twenty20. Indian team manager V. Chamundeswarnath at Trent Bride on Tuesday revealed Sehwag injury. Sehwag batted for two overs at the nets on Tuesday and felt some pain in his shoulder

Although the Indian team management refused to commit itself on the aggressive opener’s place in the squad during a stormy pre-match press conference, a BCCI release confirmed that Sehwag would indeed be flying back.

Virender Sehwag has been ruled out of the ongoing ICC World Twenty20 due to a shoulder injury. He will return to India after consulting medical experts in England. Sehwag’s replacement will be Wicket-keeper batsman Dinesh Karthik.

Karthik was in fine form with the willow for Delhi Daredevils during IPL Season-II in South Africa.

IPL Season-II was an absolute delight to watch. It had almost everything thrilling finishes and heart breaking matches. I could not able go away from it. This shows how exciting it is. Now IPL Season-II really nearing at its end and the party is beginning very high for the semi finals and finals