How Tsunami is caused due to Earthquakes? 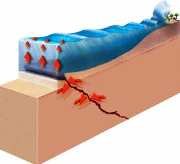 Tsunami are caused by the abrupt vertical displacement of a large volume of a body of water, usually from natural sources of kinetic energy. These forces produce a wave that shifts not just a few meters of surface water, but the entire column of water from the floor to the surface.

As the sea floor snaps up in response to the tectonic plate movement and subsequent earthquake, the tsunami wave is formed and moves out from the source of the displacement.

The wave increases in height as it enters more shallow waters close to land.

Reports indicate that so much of money has gone into the making of ‘Sultan-The Warrior’, as much a grand 60 crore rupees! Superstar Rajinikanth will

I had Joined 3 year back on the very same day on the polaris. This had been fun filled 3 years in polaris. My friend Mohan

These Pictures are taken In my College Symposium, When We was working For a trial in morning This was our college second symposium.. we did